The wedding day arrived and the beach was alive with hustle and bustle very early in the morning.  We are always very lucky with our beach weddings  that the seafront team work hard and start early to get the beach prepared for weddings and today was no exception. The tractors were out early and we were thankful for that to make sure that the beach was well groomed for the imminent arrival of one very special couple. 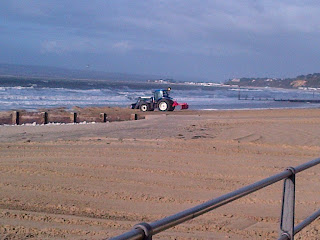 Kate and her bridesmaids were up early and being pampered by Kate Middleton’s hairdresser Richard Ward no less who created an elegant style for Kate with her hair up and dotted with beautiful wired rose buds. 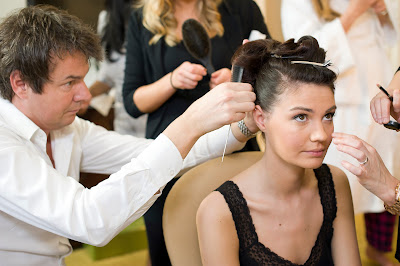 And our very own Laura Mackenzie who styled the Bridesmaids hair who wanted soft blow dried hair. 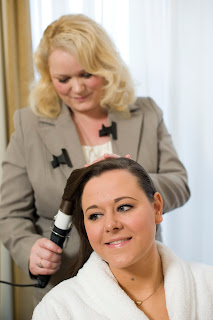 The wonderful and super talented photographer Ian Hamilton was appointed as the official photographer for Kate and Frazer and started work early taking bridal preparation shots at The Marriott Hotel whilst Kate was getting ready and being interviewed by Angellica Bell with live streams going out to ITV.  With all this in mind Kate was very much a calm bride and just took the day in which is a real surprise with all that had to be taken into account. Surrounded by TV crew and presenters and lots going on its enough on a “normal” wedding day but Kate had so much more to contend with and dealt with it all incredibly well – such a pleasure to be around. 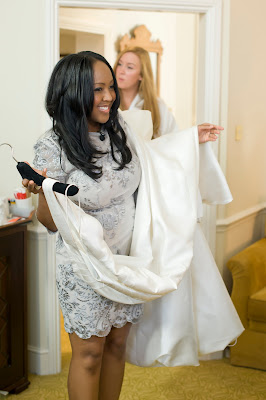 Angellica Bell helping Kate with her stunning Amanda Wakeley gown
Down in the marquee Melanie was on hand to greet Frazer and his Groomsmen and we spent the final hour tweaking the marquee and the ties and buttonholes and making sure that everyone was well prepared and calm – Frazer was so calm and chilled that we had to keep checking that it was his wedding day!  No nerves at all it seemed – just enjoying the moment. 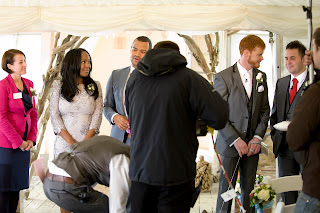 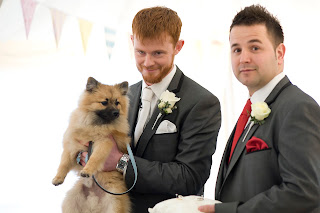 Frazer and the Best Man pre-ceremony – and an appearance from the family dog of course too! 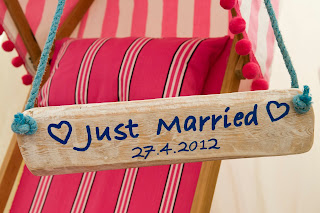 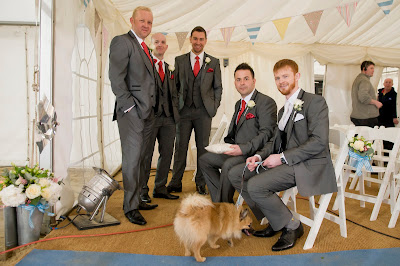 Relaxed and calm were the boys! 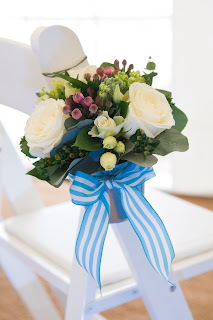 When Kate arrived we had been so lucky all morning that no one had been caught in the rain.  The press decided that they would print pictures the following day stating that we had been showered all day but in fact we were extremely lucky!


Our pretty white umbrellas were used to keep people from peeking pre ceremony and to prevent the wind from getting at that wonderful hair do! 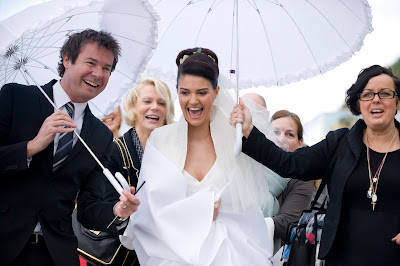 The Bride, Kate and her stylists arriving at the marquee
Kate looked absolutely stunning in an Amanda Wakeley gown and just inside the marquee had some last minute hair and make-up tweaks and was ready to walk down to the aisle to her friend Lucy singing Eva Cassidy’s “take my breath away” which created an emotional and surprisingly private feel to the occasion although the ceremony was being streamed to millions of people across the country! 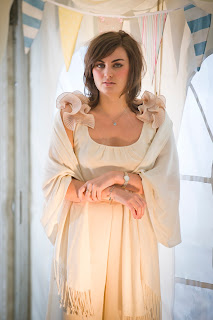 Lucy preparing to sing for the ceremony
Frazer’s face when he first saw his bride was an absolute picture. 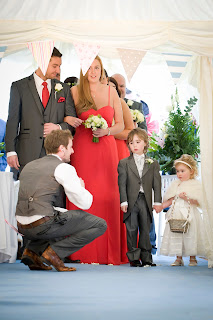 ITV Floor Manager greeting the Bridal party as they start to walk down the aisle live on ITV breakfast television
Now viewers on the morning will have noticed that the programme actually cut short during the official ceremony.  The reason for this (and they say never work with animals and children!!) was that the two adorable children shown below were unfortunately a little late doing their thing walking down the aisle which made the ceremony run a little late and when ITV have to go to an ad break then there is no other choice!  So cute though dont you think! 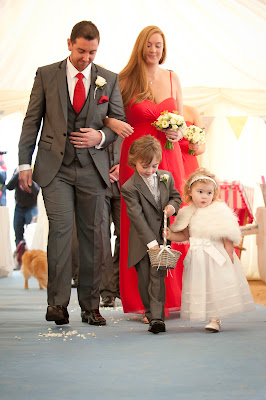 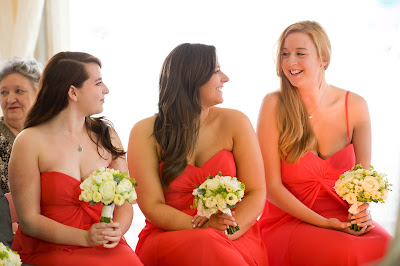 The beautiful “three Rachels” bridesmaids looking stunning during the ceremony

On the decking of the Wedding Hut, surrounded by sand, Kate and Frazer said their vows to each other and the moments were extremely heartfelt and tender and it was a true privilege to share those moments. The guests in the marquee were still whilst watching on 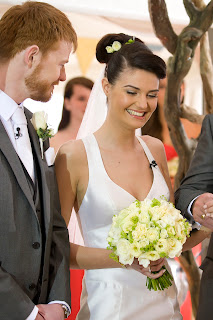 The moment that Kate arrived to Frazer  to marry 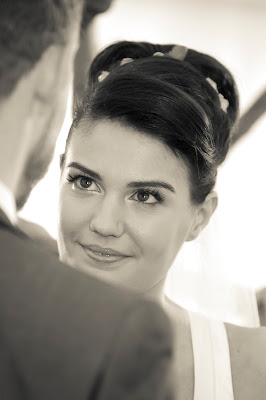 Stunning image of Kate during the ceremony 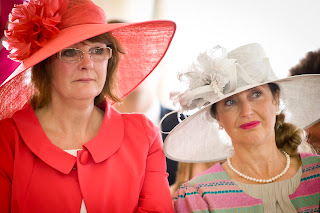 Family look on with teary eyes during the ceremony 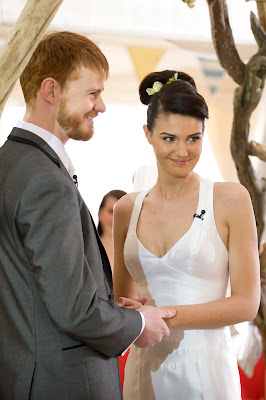 Beautiful moments during the ceremony 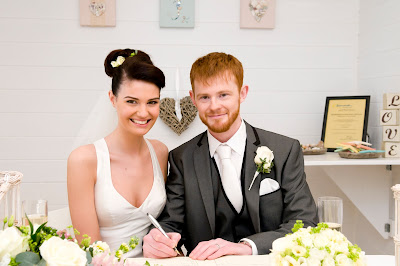 Signing of the Register inside our Wedding Hut after the ceremony 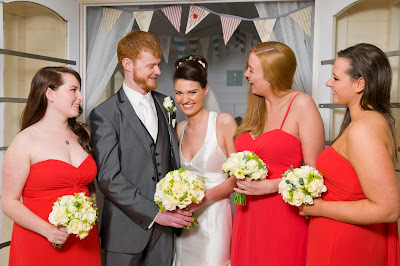 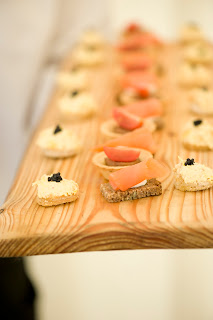 Guests were treated to breakfast canapes 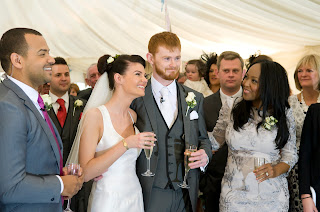 After the ceremony the couple went live to the ITV studios to give their feelings on the day so far and were given a fabulous cruise honeymoon as a complete surprise!

In the marquee after the ceremony, guests were treated to Champagne and yummy canapés prepared by our caterers Fish Face Events. 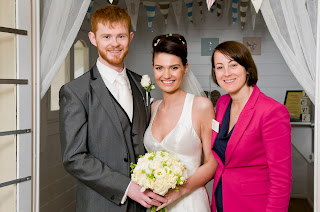 Melanie with the newly weds 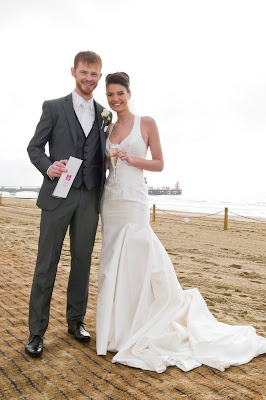 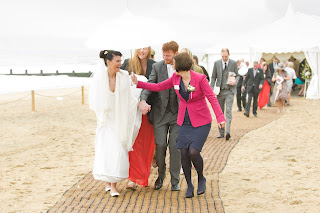 Guests make their way from our beach venue up the cliff lift to The Marriott Hotel to continue their celebrations
It was such a pleasure to have this as our first official wedding on the beach and Kate and Frazer and their families were a real pleasure to deal with.  Not one to want to take the easy route, having our first wedding live on national TV broadcasting to the nation in not the best weather we could have asked for but it was all amazing experience and we have to say that we were thrilled with the way it all went and looking back on the last few months now that we are well into our first season it was such fun and we really loved every minute – thanks to everyone who made it possible and particular thanks to Ian Hamilton of IanH Photography who did such a superb job in shooting this wedding with very little notice, early starts, long days and having to dodge in and out of TV crews to get the pictures and boy did he get the pictures – finishing with this – one of our favourites – taken as the Bride and Groom made their way into dinner at The Marriott Hotel – simply beautiful. 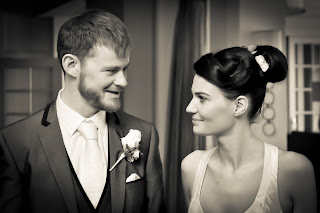